I sometimes recollect lines of poems to suit the mood I'm in or to reflect what is going on a day. Percy Bysshe Shelley's poem Ode To The Wild West Wind is Autumnal but in it there is a question.
"If Winter Comes, Can Spring Be Far Behind?"

Winter has come and come again with brutal temperatures and snowfalls. This is the first day of Spring and it snowed again. The best thing about a spring snowfall is that it doesn't last long due to the increased level of sunlight. There could be a few more snowfalls but they won't accumulate as they did in the past months.

In another month buds will appear on this tree. We will know definitely that it is Spring. 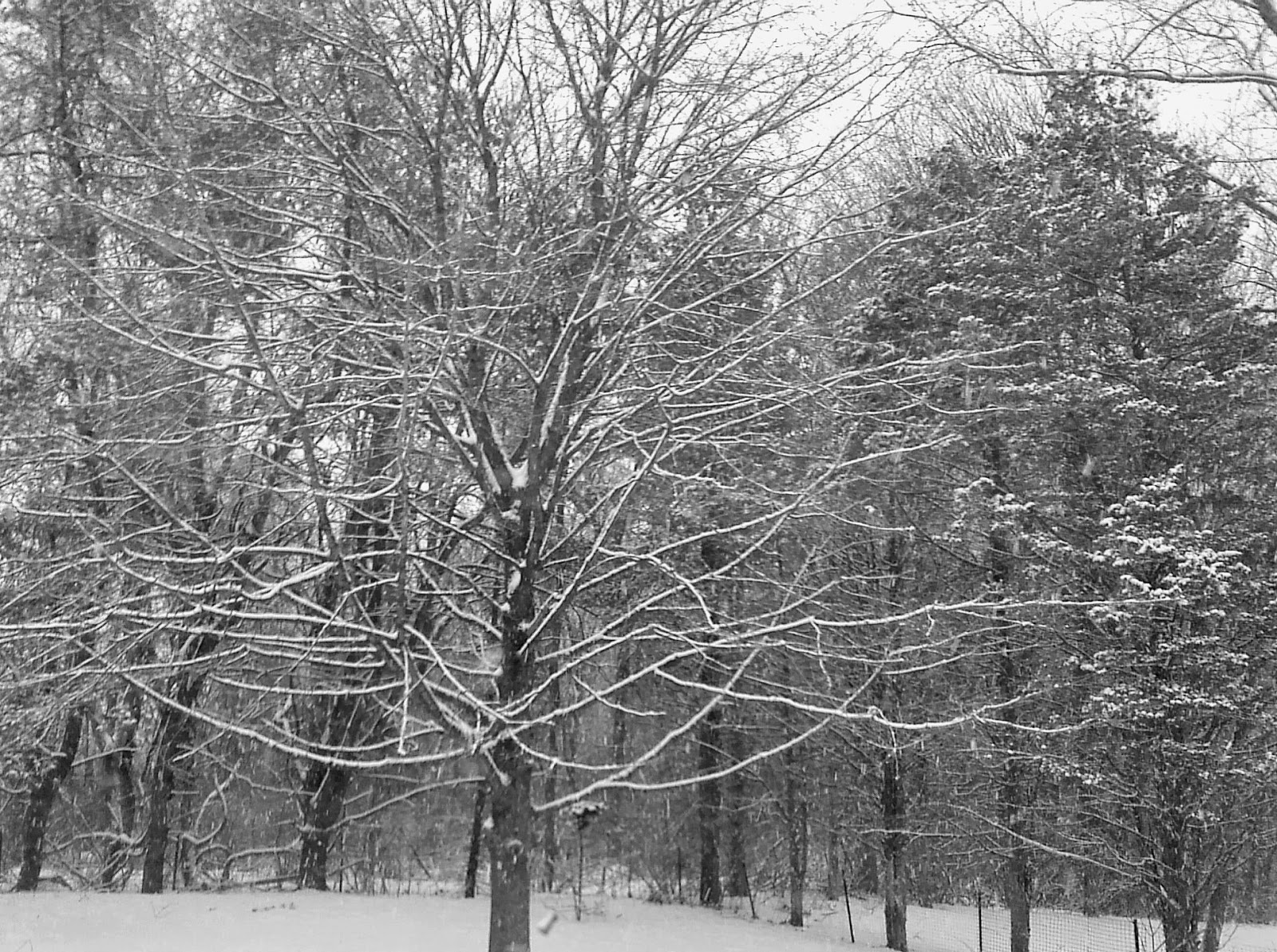 When there are only words

This week we toured the 9-11 Museum in New York City. It was overwhelming and still it bothers me as on the day it occurred. The museum strives to preserve the identity of all the victims aboard the flights ,people in the two towers, and the rescuers. Most of the victims' photographs are displayed within the museum. The organizers want to provide their life stories. Some of the victims' families recorded oral histories about their loved ones.
I was impressed with the recorded words that were written and can still be written. The absences of those who perished left a void as deep as the fountains built into the footprints of the north and south towers. The fountains have a well within the center that their depths cannot be seen by anyone standing around the perimeter of the fountains. Here, words were recorded to fill that void and give comfort.
The tour begins with audio recordings of people commenting on where they were on the day it happened. The columns are filled with text from every language. There is also a recording booth for any visitors who wish to record their account of what happened that day.
This column is dedicated to all of the first rescuers who perished in the collapse of the towers.﻿﻿﻿﻿
People wrote messages and left photos as every layer of debris was excavated. 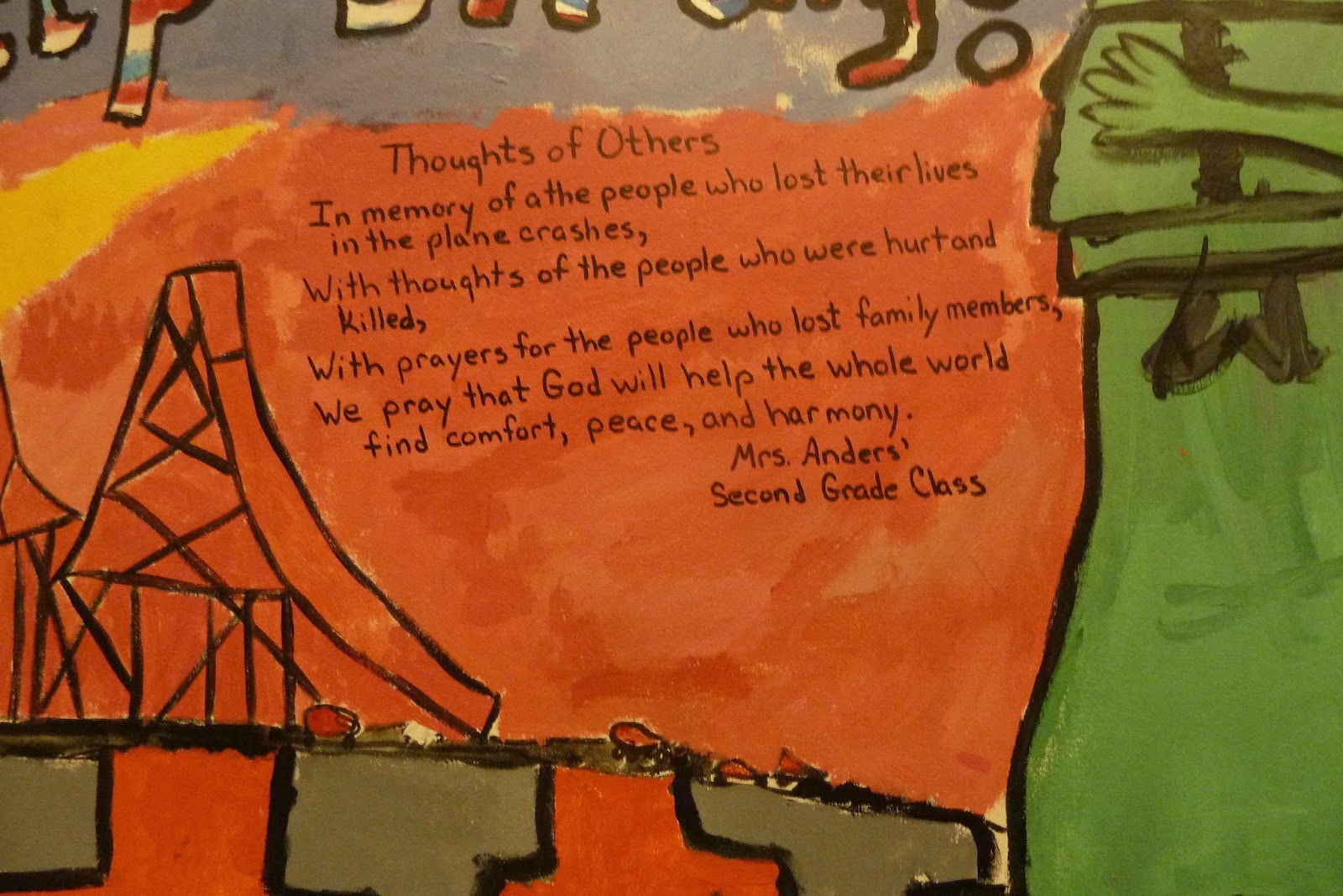 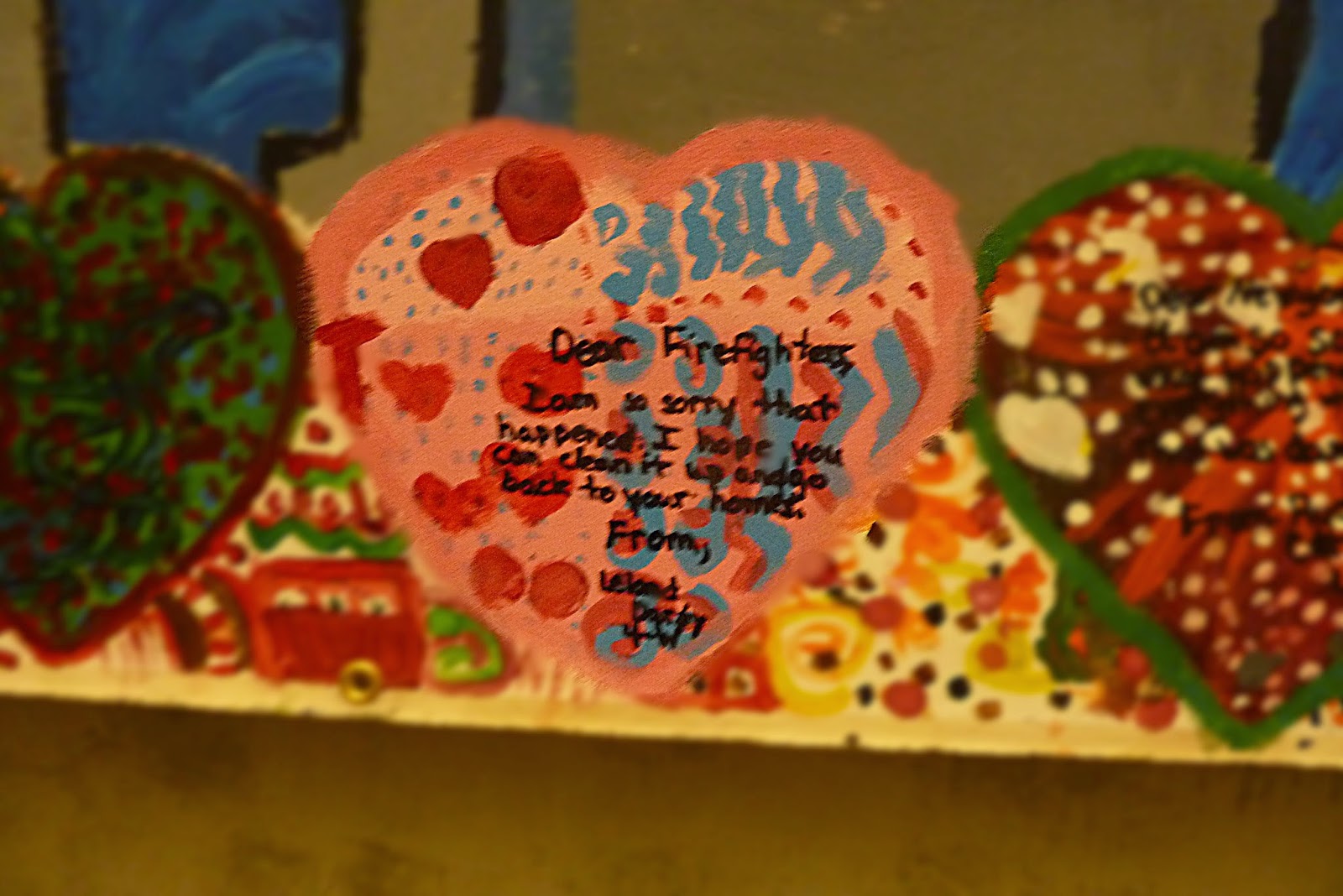 These tablets are for visitors who may wish to write their sentiments. I asked this woman pictured in this photo if she knew someone who perished. She answered yes. 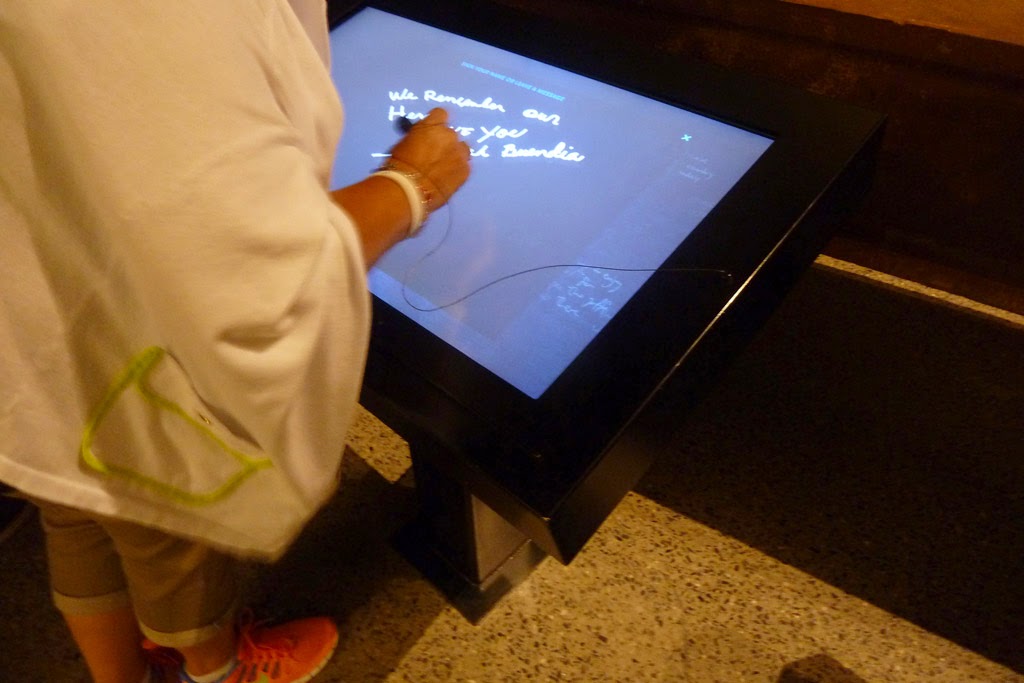 The unidentified remains of those who perished are interred behind this wall. 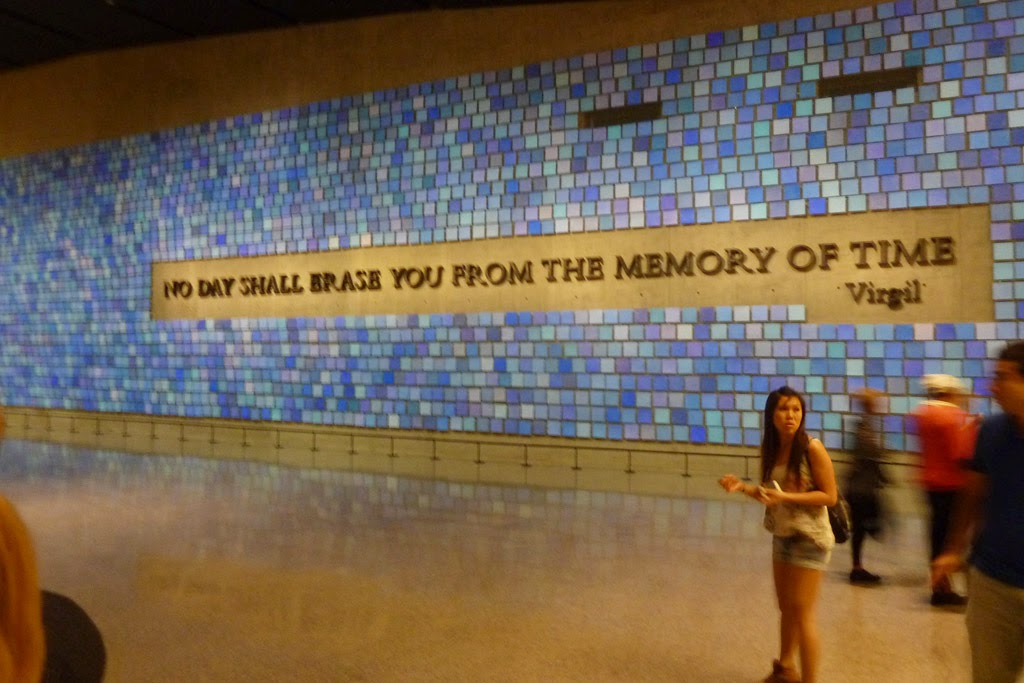 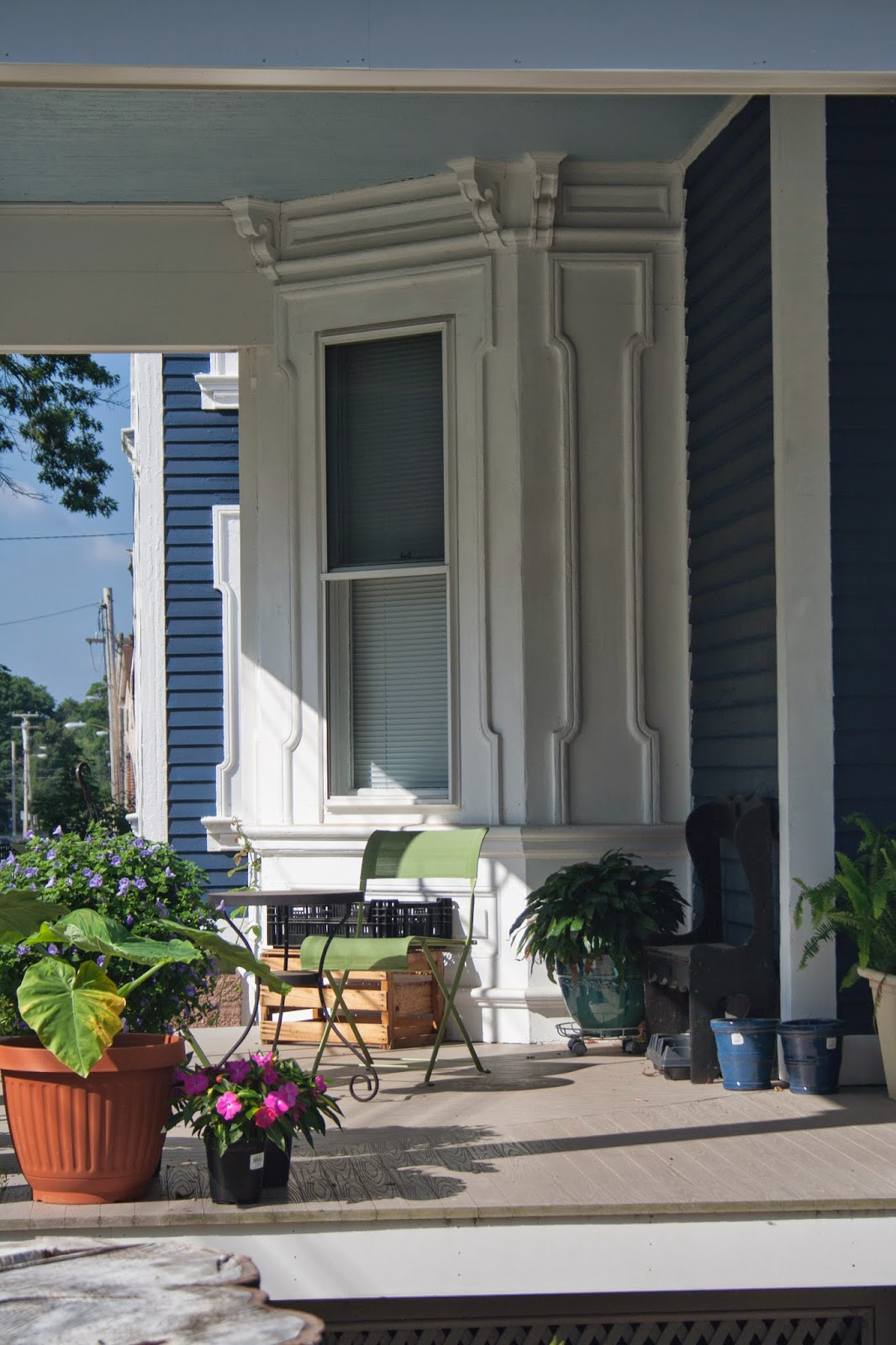 This photo is not of my house but I wish it was mine. It is a house in the center of town. It has a beautiful porch. This was taken in the morning. I can visualize the occupant of this home sitting on this chair when this porch is shaded in the afternoon.
If it were me, I would be sitting in that chair with a glass of iced tea on the table. My time would be occupied reading a book. Of course, that time must be set after all of the day's chores are completed. I can't read a book aware of what has to be done without feeling guilty. I would make sure that all of those potted plants were watered before the sun bakes them dry.
I could fall asleep in a lounge chair and not be able to read ten pages. It would be better in a chair like this. I could place my book on the table instead of my lap. Maybe in between turning the pages and advancing through a chapter I could sip my iced tea and feel the moisture on the glass. It might me some moments to reflect on what is going on in the story. It is a quiet street with hardly any traffic passing by. It could become a nice summer afternoon.
Posted by Robert's views at 3:55 PM 2 comments:

I intended on writing a blog entry daily but I procrastinated. Why? Because I waited for something significant event to occur. It finally happened. I love going to New York City to see a show and walk around. The first time that I became acquainted with the term, "The Big Apple" was in my sophmore year in high school. Our English teacher gave us a survey on our first day of class. One of the questions was about our familiarity of the Big Apple. I didn't have any reference to it. The only trips until then were  train rides to Penn Station or boarding a Greyhound bus at the NY Port of Authority. New York City was a connection point to somewhere else and not a destination in itself.

Through my grown up years, New York City has become a destination, even if it is only for a day. We are fortunate to get there by train in less than two hours. It is definitely a photographer's paradise. I would be lost without my camera. I do travel with family and that inhibits my creativity to capture as much as I would like to photograph. You have to travel with fellow photographers because we are focused on what we see. There isn't any rush to get somewhere unless you have tickets to a show or dinner reservations.

This past Wednesday we went to see a Broadway show. Ticket prices for a show are high. We made our way to the center of Times Square and stood in line to buy tickets at a discounted price. TKTS is the company that purchases tickets from the theaters. Les Miserables was available at 50% of the original ticket price. We purchased three orchestra seats that were six rows from the stage. They were towards the right of the stage but we benefited because some of the performers were staged on the right.

I didn't know that all of the dialogue was sung as in an opera. Some of the songs are so poignant and some are rousing. What a remarkable adaptation of Victor Hugo's novel. I am reading it as well and have only read over one hundred pages. The show's script follows the novel closely, although if it were as faithful to the novel, the show would have to be done in a series. It's much like a film where some parts end up on the cutting floor.

We are exploring different parts of the city beyond the theater district. We are subway riders now. We had dinner on the Lower East Side at Katz's Delicatessan. My readers will be unfamiliar with the film "When Harry Met Sally". The movie was filmed on site in New York City and one of the funniest scenes was filmed at this deli.

It was along day and we caught the 8:36 pm train back to New Haven. The train stopped at every little station beside the larger towns and cities. We arrived home after 11 pm, tired and very satisfied with our day's adventure. 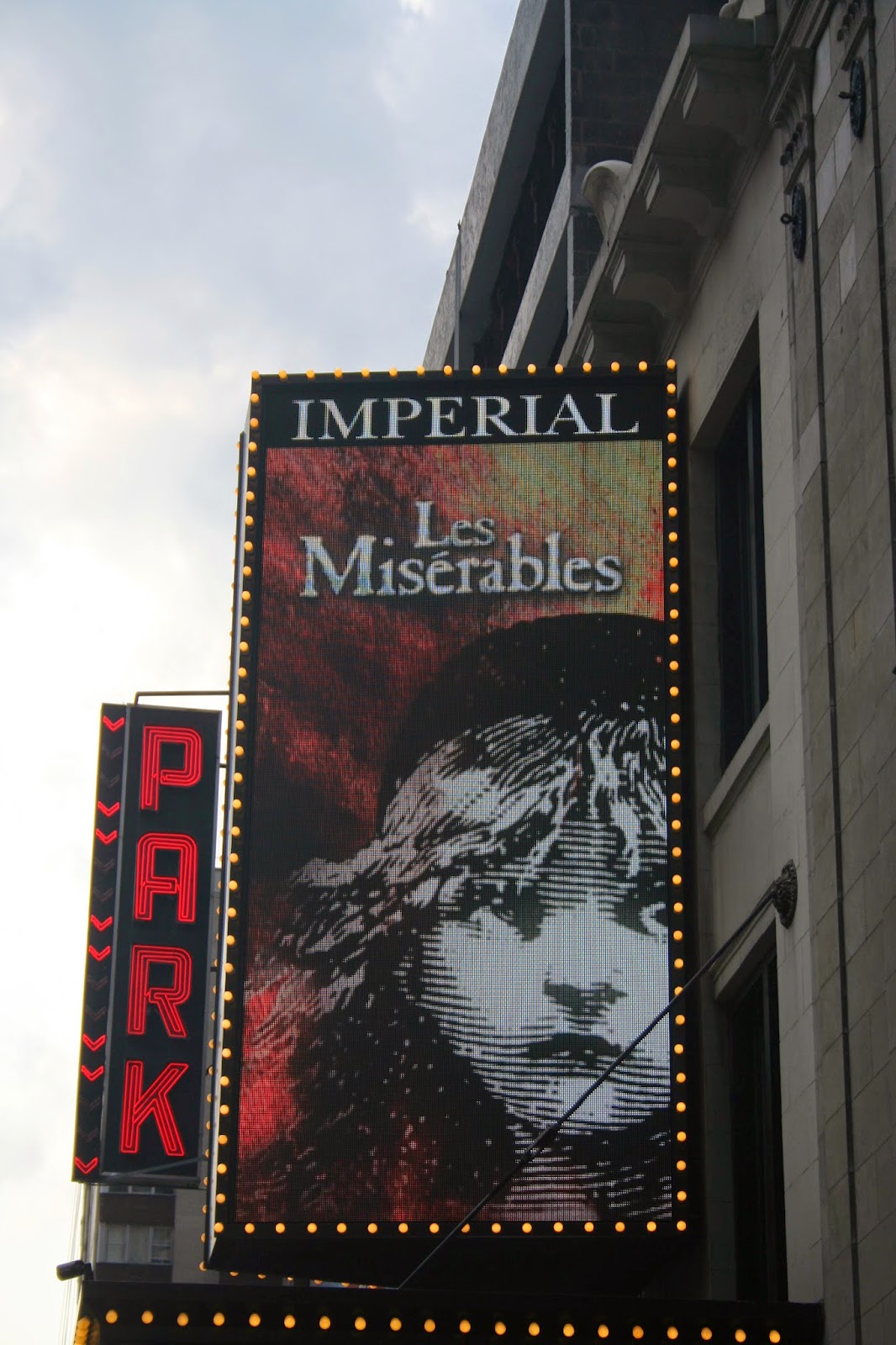 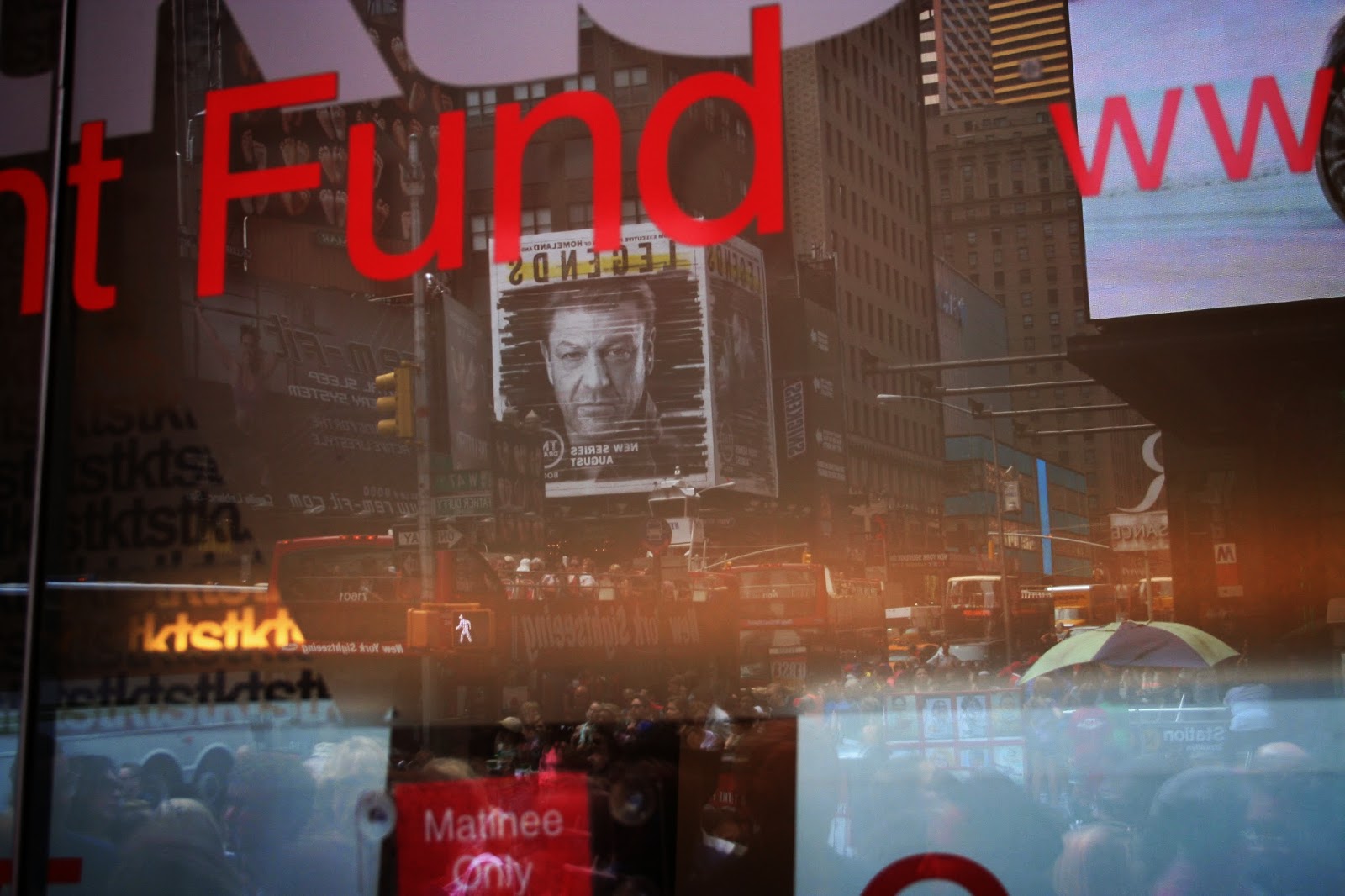 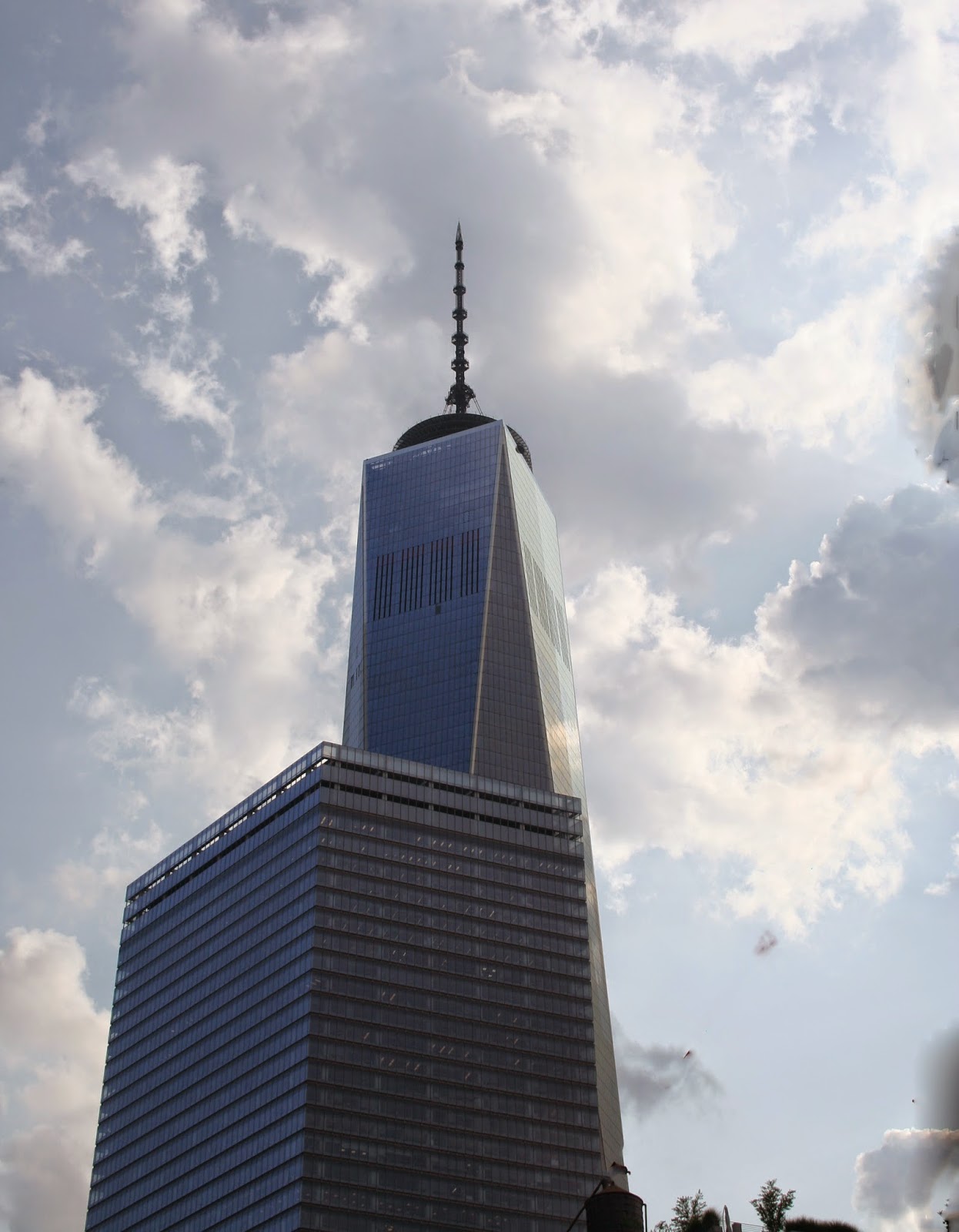 Summer has finally started. Last evening we grilled some hamburgers, cooked corn on the cob, and had salad. We ate outdoors on the patio. It was a cool evening and eventually we had to move indoors to the porch. Today is more humid. The dew point is rising. We can complain about the humidity and the heat but it doesn't worry us as snowstorms do. We have more mobility in the summer.
There are several songs celebrating this wonderful short season. This song by Nat King Cole is one of my favorites. It brings back memories of listening to it on a transistor radio and of course it was recorded on a vinyl disk at 45 rpms.
There is mention of drive in theaters in the lyrics. Fortunately we do have one near us. They revived the thrill of driving your vehicle to an open space in front of a huge screen. It's popular in this area. Three hundred and seventy-four cars packed with families attended last Saturday's viewing.
Posted by Robert's views at 4:30 PM 1 comment:

We usually think of robins with Spring. I spotted this bird perched on our birch tree during the storm. We have had thirteen winter storm since the start of the season. It's mid February and we are anticipating Spring's arrival. Every season has characteristics of beauty but continuous storms are a nuisance. You must love winter sports to partake of this bountiful snowfall. We are only spectators of the Winter Games in Sochi, Russia by watching the events on television.
I do hope that this bird's arrival brings us milder weather. 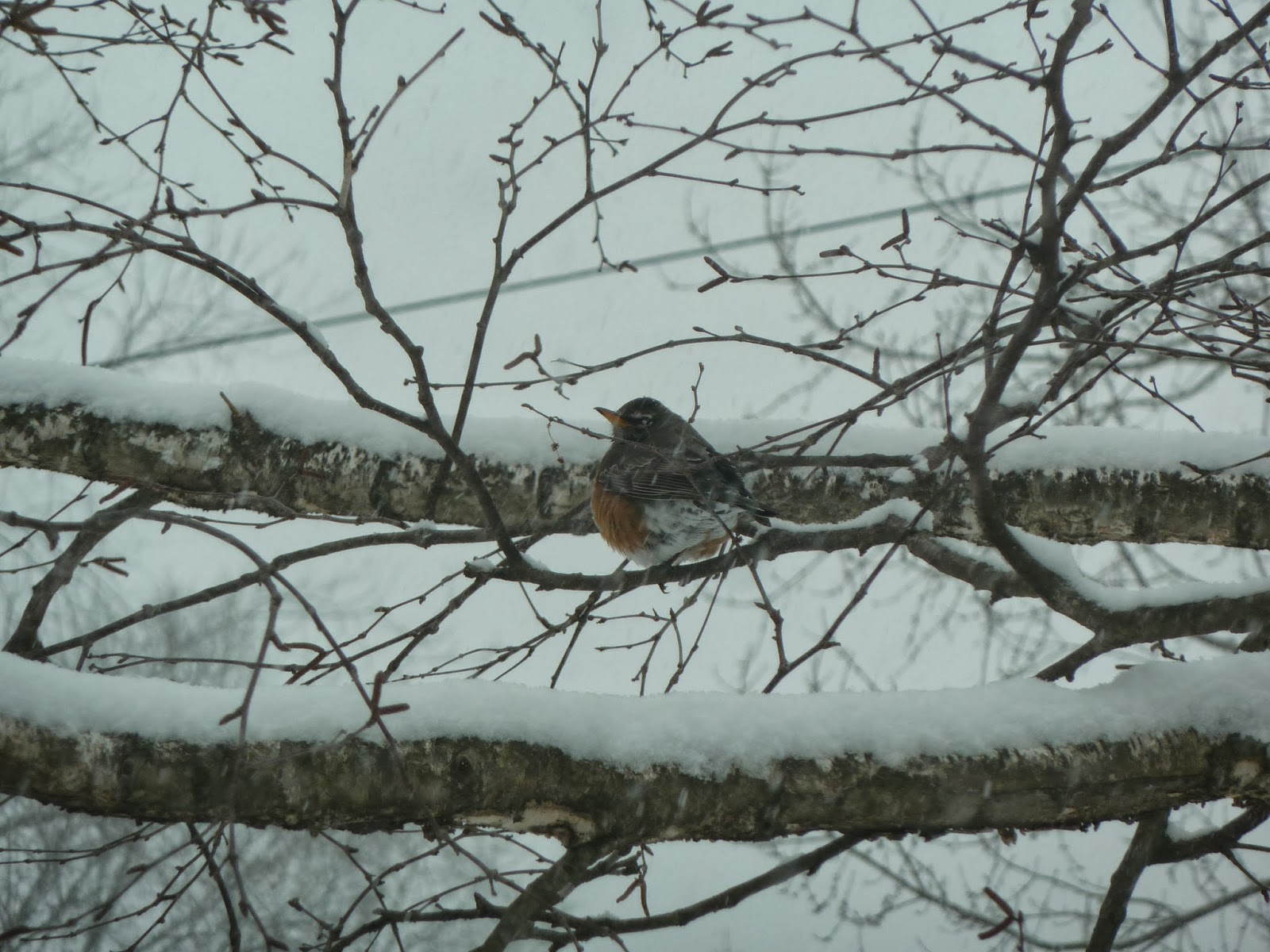 At the end of the school day a fourth grader approached me asking what is suspenseful. He wanted to know if there is such a word. I qualified the answer with a feeling. I asked him did he ever see a scary movie and know that something is going to happen. I asked him to imagine the tightness in his stomach. He understood that feeling. But there is also a time when it can be a good thing that will eventually happen. In this case it could be looking forward to a special event. It can be a big trip or a holiday. He walked away satisfied with my answers.

I remember watching the film Jaws. The opening scene was the shark's approach to a swimmer. We visualized the approach through the shark's eyes. Of course there were more shark attacks through the film, providing the movie goers suspense. I clenched the arms of the my seat in the theater. There were probably more people there that night that did the same.

I'm not an amusement park rider. I don't enjoy that feeling of helplessness in going high or twisting through a turn in high velocity. There are people who enjoy the feeling of suspense. Amusement parks seem to build more thrilling rides than the old roller coasters. There is only one roller coaster ride that I will ride and that is Thunder Mountain in Disney World. I do feel the suspense of the cars climb and then pause before they plunge downward. Maybe what seems comforting to me is the landscape around the tracks. It's supposed to be a run away tram car through a mine and into the mountains. I still clench the bar that holds us securely in place.

What would our lives be without suspense? The entertainment industry seems to cater to that need. The films today are violent and the rides in amusement parks seem to challenge a person's resolve to live through the intense minutes of a ride. There are events in life that happen without design. Winter driving is suspenseful. Suspense builds up at every intersection when I place my foot on the brake. Is there ice under the snow? We've seen televised accidents reported throughout our state and country. At least there's no physical damage done on an amusement ride. But I'm braver getting into my car to drive on winter days. Suspense is part of living.